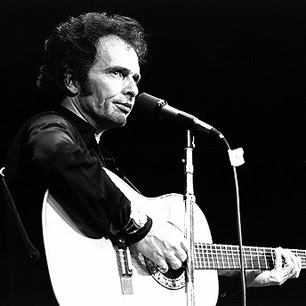 Goodbye Merle Haggard, one of the greats. 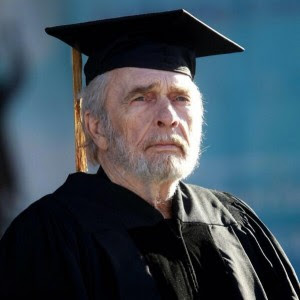 Posted by Joshualine at 18:53 No comments: 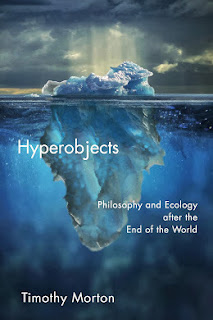 Timothy Morton's fascinating Hyperobjects: Philosophy and Ecology after the End of the World introduces the term 'hyperobjects' to describe objects that are so massively distributed in time and space as to transcend spatiotemporal specificity, such as global warming, styrofoam, and radioactive plutonium. His thought is grounded in Speculative Realism / Object Oriented Ontology and Hyperobjects provides an approachable and engagingly thorough introduction to these concepts and the implication to art, literature, religion and, of course, ecology.

Morton's understanding of music is particularly engaging and in the final chapter, 'The Age of Assymetry', he examines the transition of eras of Western thought from the Symbolic through to the present alongside the art and music of these times. Here he discusses artists from Mozart through to Schoenberg and Cage, but also looks at the likes of La Monte Young and Francisco Lopez. Here he is on the Classical collapsing into the Romantic period:


In the Classical phase, there is a Goldilocks sweet spot in which there is a pleasant symmetry between Spirit and art materials. A harmony emerges that a later age can only regard as an illusion. Humans and nonhumans meet each other halfway, generating all kinds of beautiful machinery. Mozart and Haydn sound sweetly neoclassical, their music embodying how the nonhuman no longer towers over the human, but the human doesn’t fully comprehend the depths of its own inner space.

So the Classical phase collapses into the Romantic phase. Spirit’s selfunderstanding far outstrips the materials of art at this point. Philosophy takes over the driver’s seat. In this period, humans recognize the infinite depths of their inner space for the first time. It becomes radically impossible to embody this inner space in any nonhuman entity. So Romantic art must talk about the failure to embody the inner space in outer things. Yet by failing this way, art ironically succeeds to talk about the inner space. Isn’t the inner space precisely what can’t be embodied? So the job of art is to fail better, or rather, more sublimely. So, oddly, medieval cathedrals are less Christian than a Beethoven string quartet. From here on, art can only be about the failure of its materials to embody Spirit fully, precisely because Spirit is not reducible to those materials... Art becomes deeply story-shaped, as artists realize that since they can’t directly express Spirit, they must tell the story of the failure to express it. Music develops into the extreme chromaticism of Mahler, who explores every possible relationship between the notes of a tune.

Equal temperament and the invention of the piano are shown to embody the Romantic era and the beginnings of the Anthropocene:

In order to express the nonexpression of the inner life of the human, technologies were invented such as the piano, whose massive resonant interior can be heard when the sustain pedal is depressed. Equal temperament came to dominate modes of tuning, because it enabled music to wander around in a consistent world, no matter how much chromaticism was employed. Now in order to attain equal temperament, you have to detune the piano strings a little bit. The relationships between them are not based on whole number ratios. If they were—a tuning called just intonation—then wild dissonances and interference patterns between sound waves would result: the wolf tones. Equal temperament fudges the ratios a little bit. The endless journey of musical matter in search of Spirit happens in a coherent world of equal temperament fudge, like a sepia painting or photograph. So, ironically, Beethovenian expressions of the rich inner life of Spirit are bought at the price of the enslavement of nonhuman beings—piano strings—to a system that turns them into fudge. Likewise, conductors arose to command the orchestra like a boss commanding workers in a factory. Gone were the genteel classical days when an orchestra conducted itself through the agency of the lead violinist, an arrangement that rather elegantly expresses the Goldilocks harmony between Spirit and materials that exemplifies that earlier era...

The Romantic period is the very advent of the Anthropocene, when a layer of carbon is deposited by human industry throughout Earth’s top layers of crust. It doesn’t seem like a random coincidence, the epochal event of carbon deposits in Earth; the invention of pianos, gigantic slabs
of hollow wood wound with strings tightened with industrially made nuts and bolts; the invention of the factory-like orchestra with its managerial
conductor; and the dominance of equal temperament, spearheaded by the age of the piano. Equal temperament allowed the piano to dominate,
to become a general musical instrument, much like the steam engine.

La Monte Young is held up as among the first to recognise and most successfully explore the features of our current era and fully reject the 'Goldilocks fairytale' of the past:

Then La Monte Young, a student of John Cage, took the next step. He liberated the strings of the piano from equal temperament, reverting to the just intonation that had been abandoned to create the Romantic world of sepia fudge. To return the strings to just intonation was indeed an act of justice, a “doom.” In justly tuned piano wires, we hear the doom of wire and wood. It was Young, first of the New York Minimalists, who used sound to end Romantic storytelling. Serialism had deconstructed the Romantic narrative by feeding what Webern calls the Strukturklang, the ghostly, spectral–material sound of structure as such, back into the music. Cage had gone further and fed household objects into pianos. Instead of coming up with a new tune, Young decided to work directly with tuning. Young’s The Well-Tuned Piano explodes the tradition begun by Bach’s Well-Tempered Clavier, organizing music not around a journey but around the vibrations of strings tuned to whole number ratios, ratios that allow ears to hear a dizzying height of crystal clear harmonics within any one note.

This is the music of attunement, not of stories. Young’s drone music, accompanied by Marian Zazeela’s light pieces, happen for days at a time, sometimes longer, as human voices try to tune to a sine wave that is as pure as possible. The world of sepia, the consistency that enables the world as such to be, is brought to an end by vibrant colors that clash and interfere with one another, like lines in a painting by Napangati or Riley.

There is much, much more here but worth reading Hypoerobjects in its entirety.

Posted by Joshualine at 21:45 No comments:

How High The Moon (techno, electro)